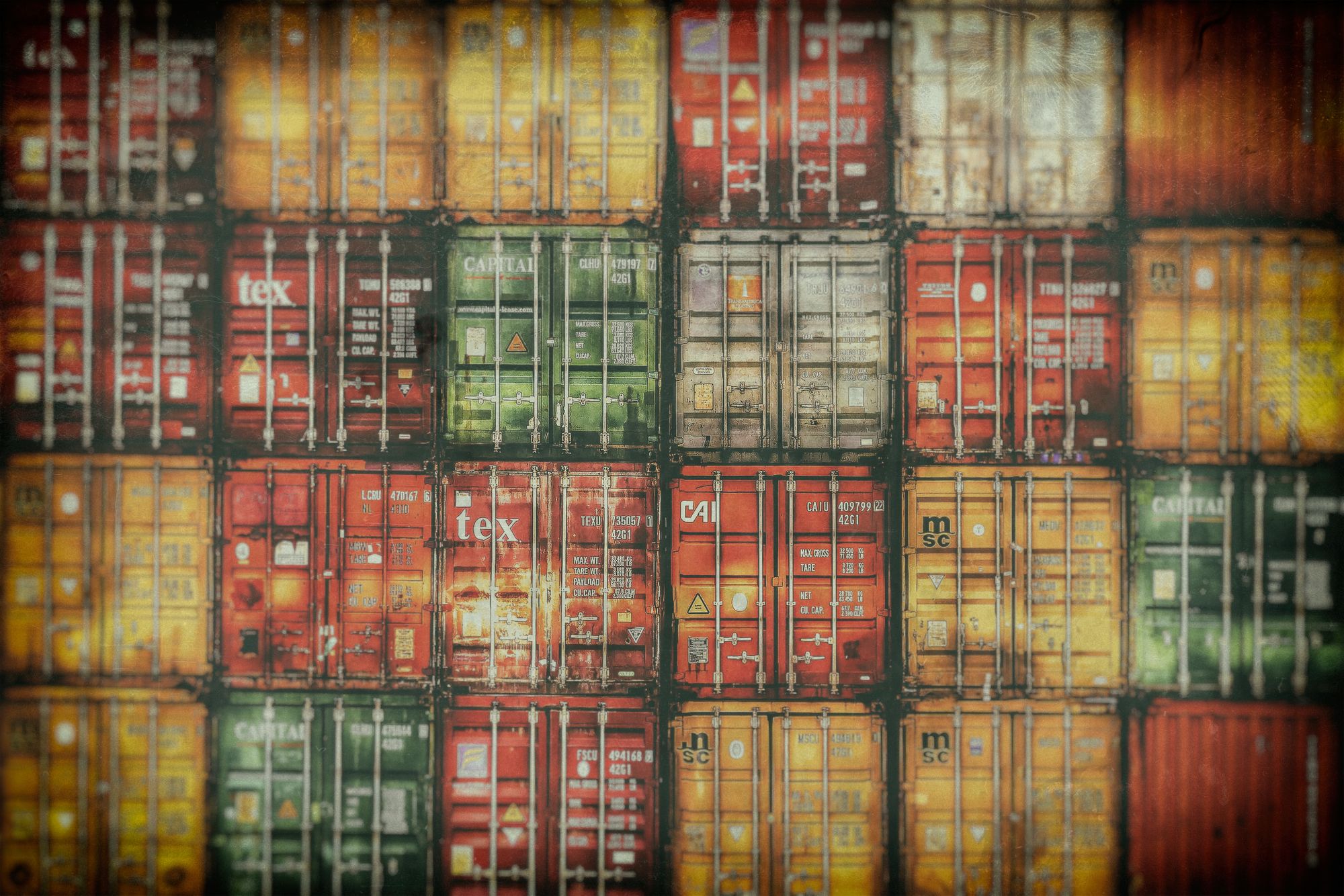 In the previous blog post we explained our overall approach to the DevOps stack used for the deployment and management of the In-Stream Processing blueprint. In this post we’ll focus on more details of Mesos and Marathon, and provide you with scripts to provision the complete computational environment on any cloud of your choice.

The advantage of Docker containers over configuration management tools for DevOps operations:

Docker-based application deployment solutions represent the second-generation approach to DevOps. The traditional first-generation approach was based on configuration management tools such as Chef, Puppet, Ansible, and SaltStack. These tools share the same core idea: to provide a layer of abstraction above the OS in order to simplify routine operations and deliver, more or less, application portability across different operating environments. Their deployment scripts can run on different environments, and produce the required application configurations with little or no modification.

This approach worked well in most cases — but not without limitations, such as:

Containers are rapidly gaining momentum because they take the “build once, run everywhere” promise to the next level, and provide significantly lighter-weight application virtualization. Effectively, they do for process management what Java did for application management. We can now package all the dependencies between an application and its underlying operating system into a container that can be reused all the way from developer workstation to production infrastructure.

Using Mesos/Marathon as a DevOps foundation for Docker 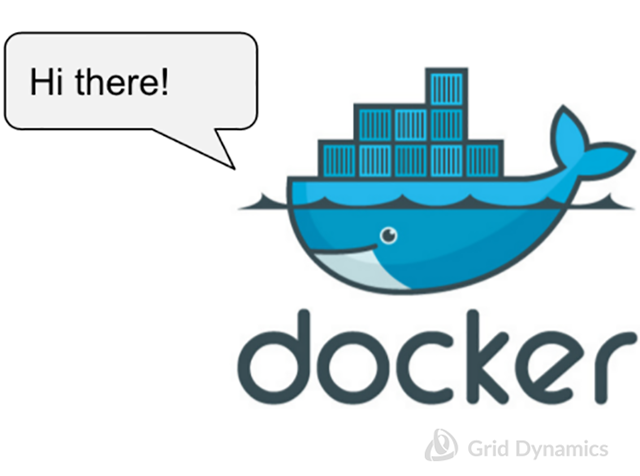 Let’s review the container-centric DevOps stack we are using for deployment and management of our in-Stream Processing platform.

Mesos has a number of outstanding features that makes it one of the best modern choices as a container management platform. 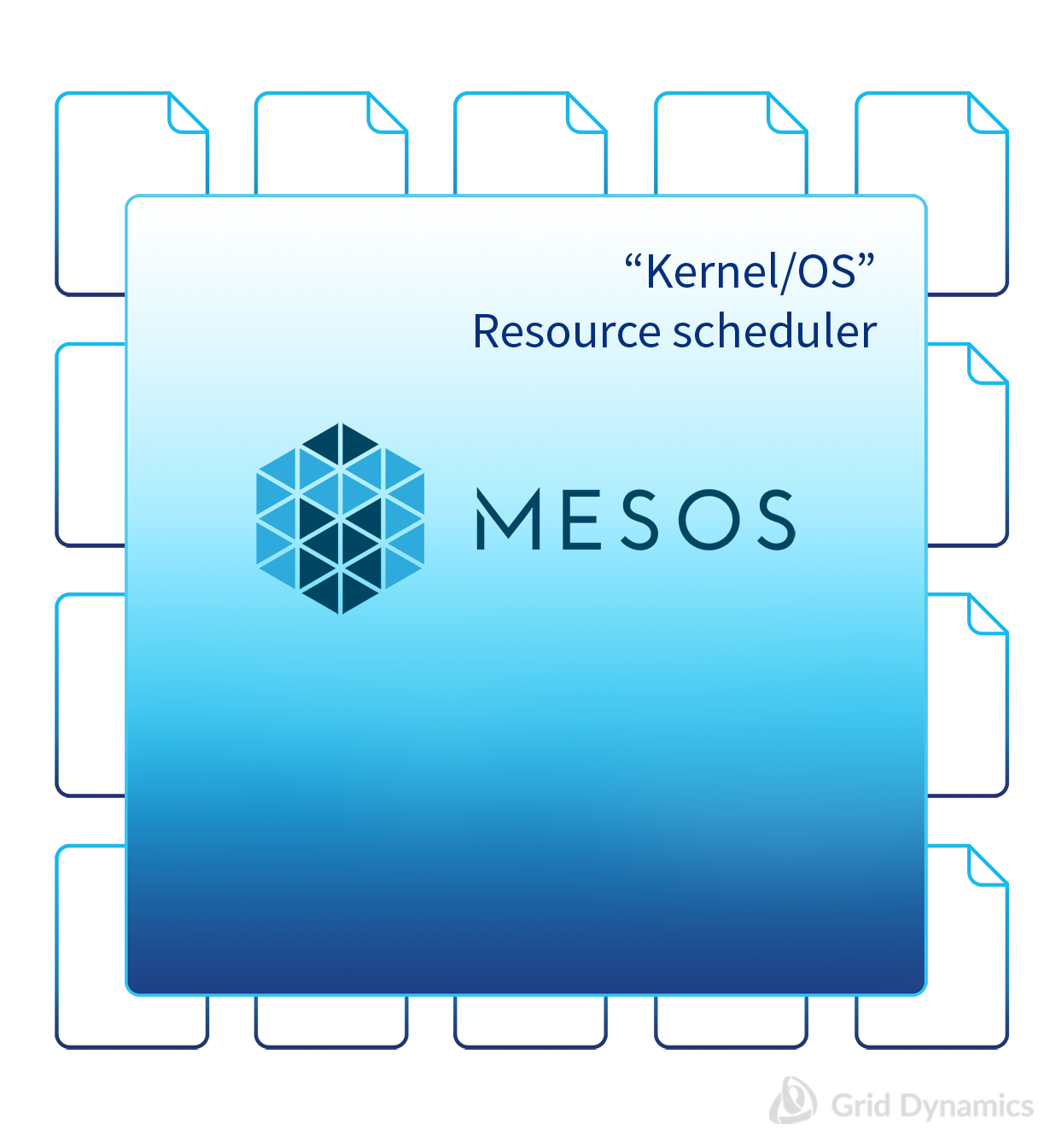 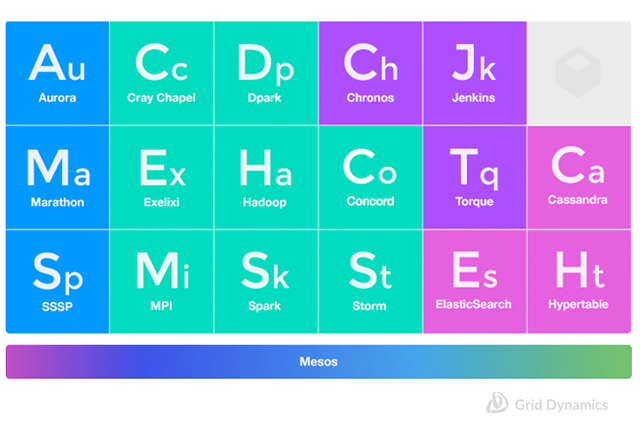 Mesos design is based on the following principles:

A typical deployment topology of Mesos master nodes and managed nodes looks like this: 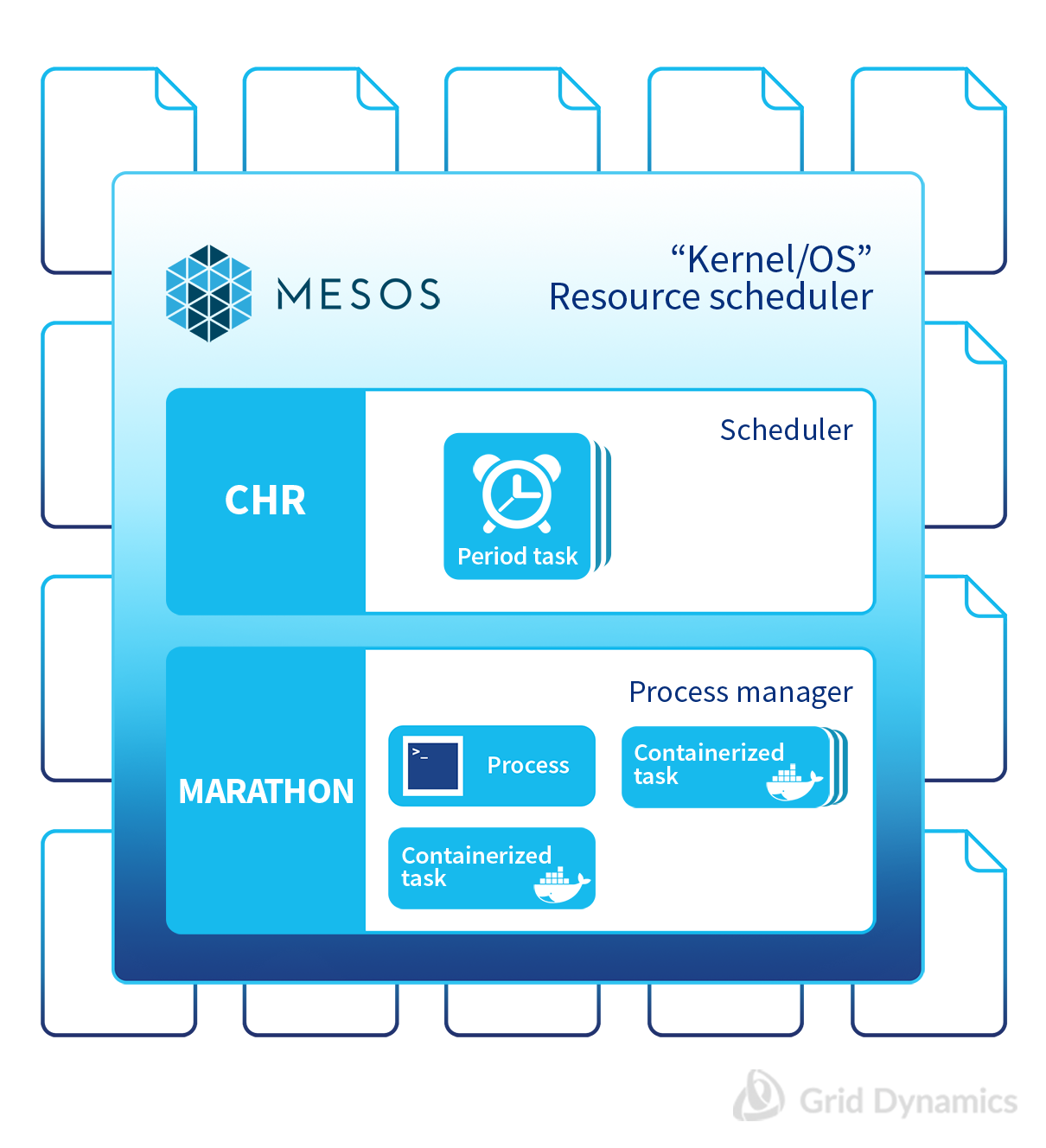 Basic Mesos features permit resource allocation out of the VM fabrics to a specific task, like running a Docker container, but Mesos does not itself handle that. The role of process management is delivered via the framework, in our case, Marathon.

Marathon is one of the most commonly used Mesos frameworks that provides the following standard capabilities:

Mesos and Marathon in action (illustrations below) 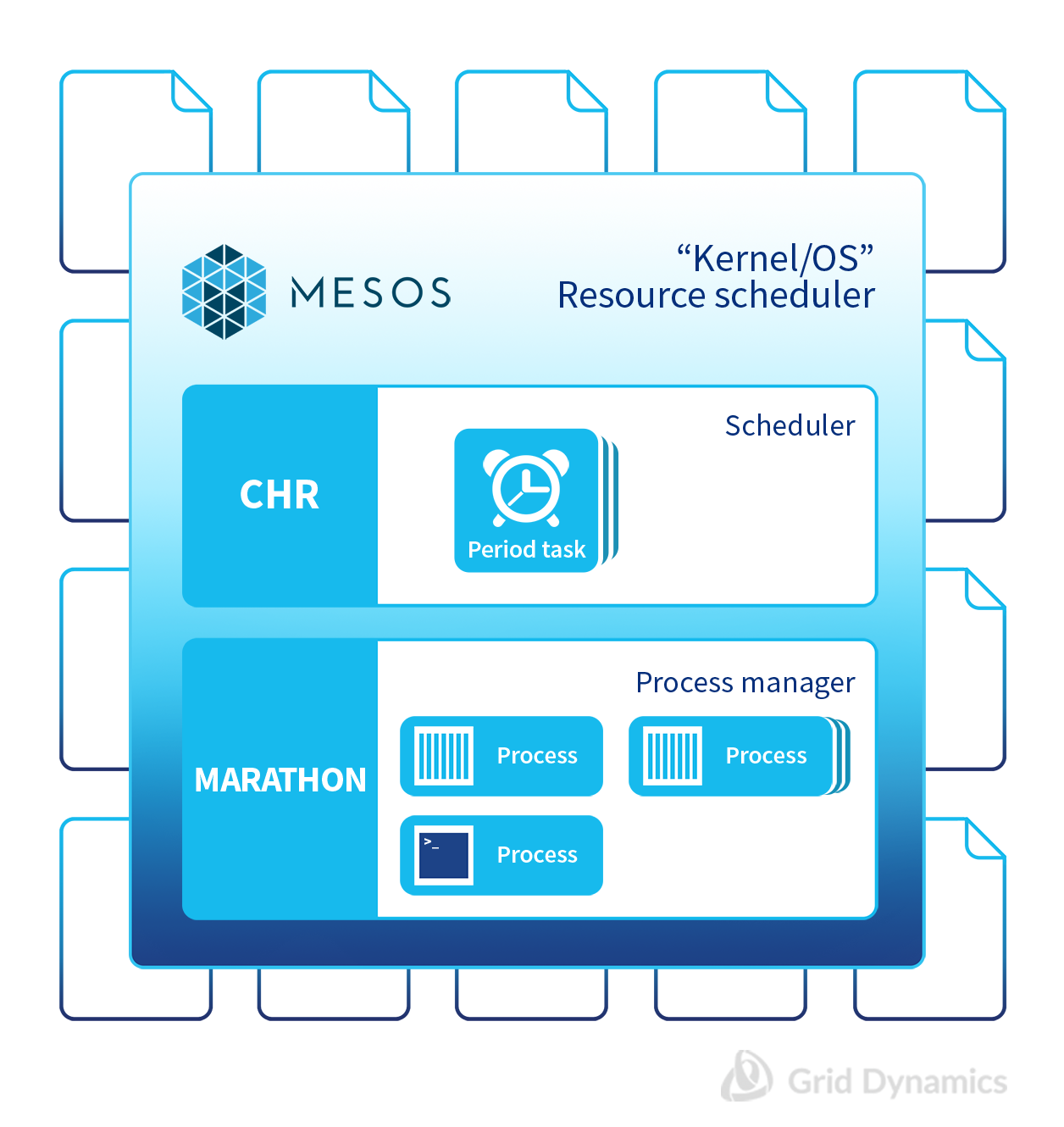 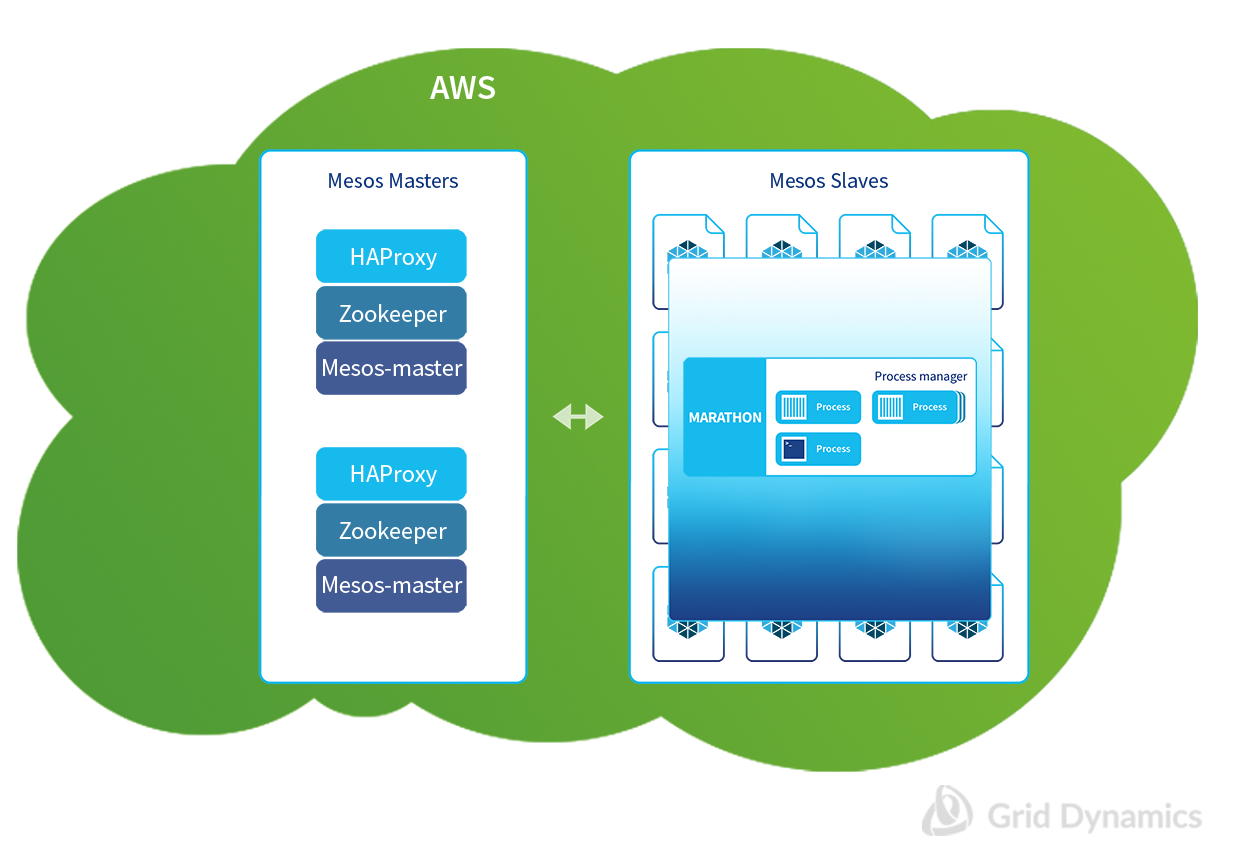 We can have a perfectly fine working setup with a “plainvanilla” installation of Mesos and Marathon, but some features can provide additional functionality. Here are a few we found useful in our  reference architecture:

Since the “Persistent volumes” feature is still shown as “experimental,” it needs to be explicitly enabled. (The official documentation is a big help here.)

Here's how to deploy Mesos/Marathon on any cloud

As we described in some detail in the previous post, we will use Ansible to deploy Mesos and Marathon on a collection of VMs, some of which will be used as Master nodes and the rest as a resource pool.

The process is very simple and straightforward, requiring only a minimal learning curve. Here is a quick-start guide on how to do it:

For super-quick learning, you can spin up the complete environment right on your workstation, in which case no additional cloud infrastructure will be required until you are ready to scale your cluster.

-----
Now you know the basics of setting up Mesos and Marathon as a DevOps foundation for Docker, and you have scripts you can install on your workstation (or wherever) to get some hands-on experience with them. If you you have any questions, Grid Dynamics is happy to help. Please email and we’ll get back to you shortly. And don’t forget to subscribe to our blog. We have lots more useful information about Mesos, Marathon, Docker, DevOps, and other interesting topics coming up.

We will continue to cover technology behind the scene of our project deeper in next posts, however here are some links if you want to know more: